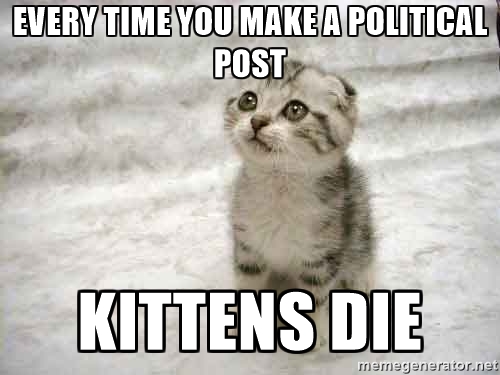 *No kittens were harmed in the making of this post. Obviously.

“Oh nooooooo….she’s going to talk about politics!” While I can assure you that I am just as politically exhausted as the rest of you, I am going to broach the subject. Because in today’s world, it appears that we can’t afford not to. And healthcare legislation, being particularly critical to survival at this point in my life, is capturing my attention at the moment.

The Affordable Care Act (ACA, aka Obamacare) may not be perfect, but it has a solid foundation that has brought health coverage to millions of Americans. Building on that foundation and investing in strategic fixes versus a complete gutting would make the most sense in a sane world. But things haven’t been so sane lately, and a full repeal and replacement of the ACA is the most likely scenario ahead of us at the moment. With that in mind, I thought I’d share a little of my story and how the ACA has helped keep my family and me alive and healthy.

Before the ACA was implemented, 59% of Americans with employer-based health plans had a lifetime cap, or limit, on their health insurance benefits. While caps varied, 16% of those insured Americans had a lifetime spending maximum of between $1 million and $2 million. Even those with a “generous” cap of $2 million or more could quickly find themselves in trouble if they were diagnosed with a chronic condition or experienced a catastrophic medical event, such as a serious car accident or a premature birth.

Last year I had $619,728 in healthcare expenses covered by Tim’s employer-based insurance. That’s a single year of staying alive, and a cost that will most likely just go up as treatment progresses. It doesn’t take a math genius (which is good, because I’m definitely not one) to figure out that if lifetime spending caps are reinstituted with a repeal/replacement of the ACA, I would quickly run out of financial runway to continue life saving treatments.

Getting insured for pre-existing conditions

When I was in my twenties, I had to pay out of pocket for antidepressants and related doctor’s visits. Like any 20-something kid, that era was punctuated by a number of upwardly mobile job changes, and insurance plan changes to match. And because my major depression was considered a pre-existing condition, new insurers wouldn’t pay for its treatment.

Fortunately I had good doctors who were also generous with their drug samples, but I remember having to make prescriptions stretch and occasionally going without. In 1996 the Healthcare Insurance Portability and Accountability Act (more commonly known as HIPPA) placed limits on insurers’ ability to implement a pre-existing conditions clause, and the ACA further removed these restrictions.

If pre-existing condition health insurance clauses were to become legal and widespread once again, my husband would be locked into his current job so that we could retain the same health insurance. In those circumstances, a job loss would be absolutely devastating.

When I was a young woman, having the ability to gain some financial breathing room by remaining on my parent’s health insurance until age 26 would have been a huge help. The crushing student loan debt I was under in my early twenties was enough of a burden (but that’s another discussion). As a parent, I know that by providing our young adult children with health insurance, we’ve been able to help them successfully transition into the working world without making them choose between essentials like healthcare and food.

These are just a few of the reasons why I’m invested in making sure that our lawmakers don’t throw the baby out with the bath water when it comes to repealing and replacing the ACA. There are plenty more, and I’m sure you have your own “wish list” for whatever health insurance legislation we end up with (I’d love to hear your thoughts).

Which brings me to the impetus for this post. On April 1st, there will be a nationwide March for Health in D.C. and other locations across America. Spearheaded by the fabulous Christel Marchand Aprigliano over at The Perfect D and DPAC, the March for Health provides an outlet to make our voices heard so that any repeal/replace program for the ACA promotes “equitable and affordable access to quality healthcare for all.” This is a non-partisan event, and I would encourage anyone concerned with the future of our healthcare insurance system to get involved. You can sign up for updates over at the new March for Health website.

One thought on “What the ACA Means to Me”